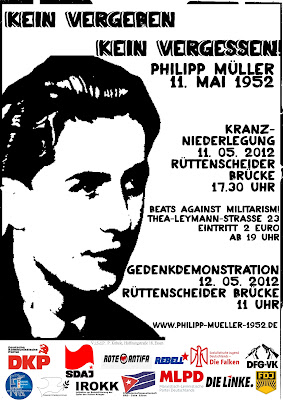 Numerous are the ones, which speak out and which did not stop speaking out about infringements of human rights in GDR. Sometimes rightly, often wrongly.

In every case, these speeches are very convenient to make forget the reprehensible practices of the authorities of FRG.

The ban on the KPD in 1956 was already the object of an article. We could write on the reconstruction of the big industrial groups, which had very widely supported Hitler, on the encouragement in the irredentist and revanchist movements, on Nazis' preservation in the spheres of the power and in the high administration…

Today, it is Philipp Müller's figure which will be evoked.

Philipp Müller was born on April 5th 1931 in Munich in a catholic family. He was trained as a locksmith and worked in the workshop of railroad of Neu Aubing.

In 1950 he went as a delegate of the FDJ from Munich to the meeting of the youth of Germany in GDR and also participated in 1951 in 3rd world Festival of the youth in East Berlin.

He married an East Berlin, Ortrud Voß. In December 1951 their son Joachim was born. Müller applied for emigration in GDR and lost after that his position.

On May 11th 1952, a demonstration in favour of the peace in the city of Essen was attacked by the police, at first with dogs and bats then with real bullets. Philipp Müller, a member of the Free German youth, became the first person to be killed in a demonstration in the new Federal republic.
No policeman will ever face responsibilities for the death of Müller, but eleven demonstrators will be imprisoned for a total of six years and four months for opposite conduct in the good customs and "crimes of treason against the Basic law".

Numerous communists and German radical activists of the left (among which the DKP and Die Linke) call to a demonstration in hommage to Phlipp Müller on May 12th 2012 on the scene of the drama in Essen.

Let us not leave the history to our opponents! East-German demonstration in Berlin on 26 March 1949 against the "Westmark" after the reform of the currency (Waehrungsreform).

On the poster we read "against the monetary crimes of those who want divided Berlin! For a unified currency and (…)" (source:  Deutsches Historisches Museum). July 1947, entrance of the West Germany in Marshall Plan. The Marshall plan is not estimated in the same way in zones of western occupation and in the Soviet occupied zone. That's an understatement...


Above, a poster of 1948  from East Germany (source: Deutsches Historisches Museum).

The text of the poster is the following one " Hinaus! Wir brauchen keinen the Marshall-Plan, wir kurbeln selbst die Wirtschaft an! ".

A possible translation: "outside! We do not need a  Marshall plan, we boost ourselves the economy!".

23 May 1949, Proclamation of the fundamental Law of Federal Republic of Germany.

Session of closure of the parliamentary committee who had drafted the fundamental law (source: Bundesarchiv).


Demonstration of mass on the place Marx in Leipzig on the occasion of the creation of the German Democratic Republic (source: Bundesarchiv).